Single Board Computers (SBCs) are becoming much more popular in the digital technology world. That’s mainly due to their affordable prices and how they incorporate all the necessary components of a computer into one board, making them a great fit for embedded systems. One of the most popular SBCs we have today is the Raspberry Pi. You can get a Pi Zero for as little as 10$ and 35$ for the Pi 4 at the official Raspberry Pi website. Once you have your Pi at hand, you can acquire some additional basic accessories to get you started. They include:

Assuming you already have an OS installed on the SD card, you can start your Raspberry Pi with these three items. But we all want the best out of this small board computer. You can use it to perform various tasks like software development, IoT projects, outdoor projects, and much more. Of course, all these will need additional accessories other than the three items mentioned above. In this post, we will look at the top 10 Raspberry Pi accessories you should definitely have.

This 7-inch touchscreen display for your Raspberry Pi can be a reliable accessory other than using an external monitor or screen, which requires you to have a mouse and keyboard. It gives users the ability to work on all-in-one projects like integrated projects such as tablets, infotainment systems, and embedded projects. The official touchscreen monitor from the official Raspberry Pi site supports an 800×480 display, and you can connect it to your Pi via the DSI Ribbon cables and jumper wires.

The latest Raspberry Pi OS comes with drivers for the touchscreen, thus including support for 10-finger touch and an on-screen keyboard. I find the Pi touchscreen really interactive as it converts my Raspberry into a tablet or a standalone device. Other than the official Raspberry touchscreen, we have other touchscreen displays from third-party vendors, which come with more advanced features like 16:9 ratio and 1080p resolution, USB ports, HDMI-in port, sound speakers, and much more.

If you plan to use your Pi for multiple projects, you need to have a good casing since using the board alone poses many physical security risks. However, for Raspberry Pi 4 users, you don’t just need any casing; you need Argon ONE M.2 Case For Raspberry Pi 4. 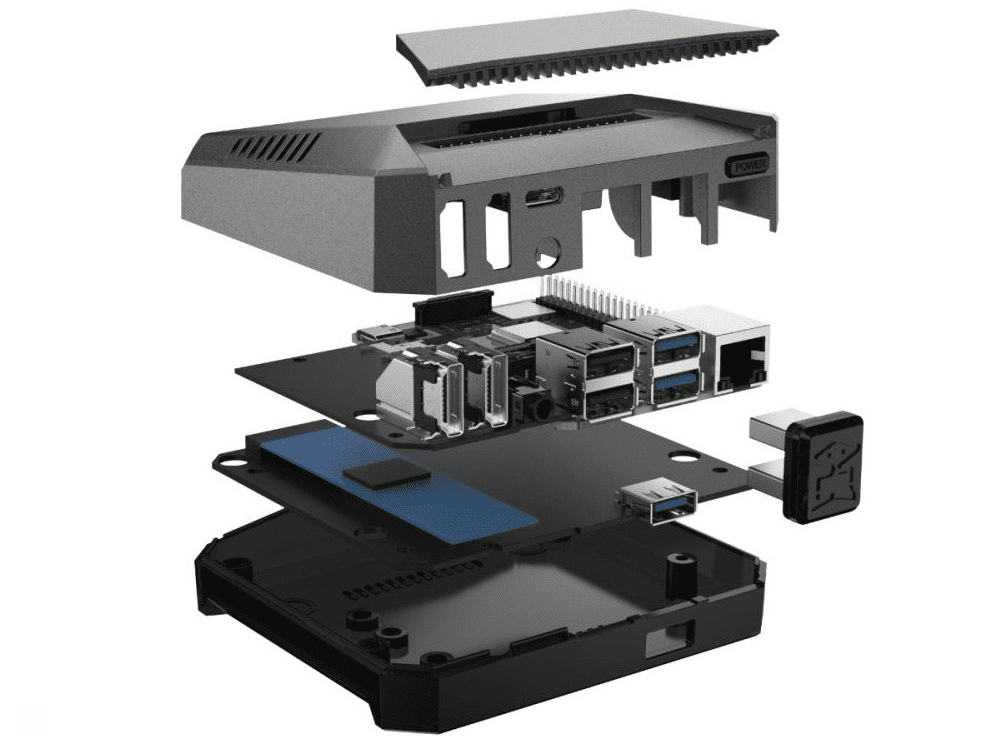 From the image above, you can see Argon One M.2 is not just a casing you use to cover your Raspberry Pi board. Instead, it contains other quality features that convert your Pi into a Desktop alternative or a set-top media box.

Looking at all these features, you can definitely guess that this casing isn’t cheap. As of writing this post, it cost $45.00 on the official Argon website. One interesting bit with the Argon M.2 case is the scripts available for managing the Fan, IR, power, etc. You will find the instructions for downloading these scripts on the Argon One M.2 user manual.

This is another great accessory, especially for IoT enthusiasts. Connecting jumpers on Pi’s GPIO can be quite hectic and complicated. That’s mainly because the pins are quite close to each other, and you also need to be very careful not to break them. The GPIO Breakout module kit is a one-time solution to all these.

Mount the 40-pin GPIO module on your Raspberry PI and easily connect your stripped wires (4.5mm) and hold them in place using the screws at the top of each pin. The kit comes with a small screwdriver to tighten the screws in place.

Are you working on a project that needs a camera, and you don’t want to spend more than $50? Then get the Raspberry Pi Camera Module V2 and use your own lens. It uses an 8 megapixel Sony sensor which ensures high-quality images and videos of up to 1080p30, 720p60, and VGA90 video modes. To attach it to your Pi, it comes with a 15cm Ribbon cable that’s attached to the CSI port.

The camera is compatible with all Raspberry Pi models (1,2,3, and 4). The camera can be accessed using MMAL (Multimedia Abstraction Layer) or the V4L (Video for Linux) APIs. Additionally, you can make use of third-party libraries like the Picamera Python library. The number of projects you can carry out with this camera, both at the beginner level and for advanced users, is limitless. For example, you can use it for live video streaming, capture still photographs, slow-motion or time-lapse photography. Other big projects include a facial recognition program, security camera, or dashcam.

The Raspberry Pi is quite a small and portable device makes it ideal for outdoor projects. However, there is a catch. Where will you get a power supply when working in the wild? That’s where the PiJuice Hat comes in. An external power solution that powers your Pi for up to 4-6 hrs and acts as a UPS (Uninterruptible Power Supply).

It sits on top of your Raspberry GPIO and has 4 screws to hold it in place. Thus, it only uses 5 GPIO pins, and you have the rest for your projects. The Hat comes with a 182 Lipo/Lilon battery but has support for a larger battery capacity. Other interesting features with the PiJuice hat include the onboard RTC (Realtime Clock) that tells the Pi the correct tie without power or an active internet connection. It also has  Microcontrollewr that manages shutdown functionalities.

The Raspberry Pi 4 uses a Type-C USB cable; unfortunately, if you use any USB-C cable, there is a high probability of not working. One of the main reasons for that comes from the Pi design. During the development, the developers may not have followed the USB-C specification to the letter. A letter by Eben (Raspberry Pi co-founder) stated that “A smart charger with an e-marked cable will incorrectly identify the Raspberry Pi 4 as an audio adapter accessory and refuse to provide power,” says Upton. A solution to all these is to use the official Raspberry Pi 4 charger.

The power supply has an output of 3.0A and 5.1V, which is reliable power even for resource-intensive tasks (media server or webserver) and tricks like over-clocking the Pi for better performances. It is available in white or black color.

Earlier Raspberry Pi boards came with a single Full-sized HDMI port for graphical display. With the Pi 4 board, there have been some advancements. It comes with two Micro-HDMI ports for dual monitor support and supports up to 4K monitor resolution. Unfortunately, most of us may not have the micro-HDMI cable as it is rarely used. To solve this, I highly recommend the Micro-HDMI to Full-sized HDMI adapter.

Some of the main features of this power relay module are:

The heavier tasks you carry out with your Raspberry Pi, the more heat is generated. Tasks like gaming, media server, web server, overclocking can be quite resource-intensive, using a lot of power and generating a lot of heat. Even though the Pi is designed to work well even at high temperatures, it would be wise to have a cooling mechanism. Basically, when you hit temperatures above 80 degrees, the CPU is throttled, and above 85 degrees, the GPU is throttled to cool down the Pi. With a fan in place, you can perform resource-intensive tasks without reaching high temperatures. Many fans are available for the Pi, but I would advise getting the GeeekPi RGB CPU Cooler.

Some interesting features about this item include:

One more accessory you should have for your Raspberry board is a keyboard and mouse, especially if you are not using the touchscreen display. Even though we have other methods to connect to our Pi, including SSH, VNC, etc., a keyboard and mouse would still come in handy. Most standard USB keyboards and mice will work with your Pi. However, today we will look at the official Raspberry Pi keyboard with integrated USB Hub and the official Raspberry Pi mouse.

The three-button mouse with a scroll wheel is supported by all Raspberry Pi models. The keyboard features a 78-key matrix that you likely find in a laptop. It also a 3-port USB where you can connect additional USB-supported devices.

That’s it! Those are 10 Raspberry Pi accessories you can acquire. Some of them are project-based and are only useful if you are working on a particular task. However, acquiring them will not only give you diverse ideas, but you will also enjoy getting the most out of your SBC. Please feel free to share more ideas with our readers below on some of the best accessories they can get for their Pi.