How to boot Raspberry Pi from a bootable USB drive

By default, newer Raspberry Pi 4 boards support USB boot. Earlier boards require that you update the Bootloader, or you have to select alternative boot modes. In this Raspberry Pi article, we will take you through the steps needed to successfully boot your operating system from a USB drive instead of the microSD card.

Why boot from a USB drive

Raspberry Pi 4 has two USB 3.0 ports which makes USB mass storage faster than MicroSD cards. The other reason you might want to boot from USB is that USB drives are relatively cheaper than microSD cards. You might have noticed that some Pi 4 cases include M.2 SSD adapter, which connects via USB.

We will demonstrate how to boot the Raspberry Pi operating system from USB in Raspberry Pi. To get started, you have to boot into your Raspberry Pi from a microSD card. If you do not have a Raspberry Pi installation, you will have to install it.

After installing the Raspian operating system, update your OS and firmware through the following command.

To enable USB boot mode, you will first need to add a config option and reboot your Pi. The config option will set the USB host boot mode bit Raspberry Pi’s One Time Programmable (OTP) memory to allow your Pi to boot from a USB storage device.

To enable USB boot, open the command-line and type the following command to update the configuration file.

The command will add the option; program_usb_boot_mode=1 to the boot/config.txt configuration file. The option will only enable USB host boot mode.

The next step is to reboot your Pi through the terminal command or your user interface.

3: Verify if the boot mode is enabled.

When your system has completed its reboot, you can check if the boot mode has been enabled or that the OTP has been successfully programmed with the following terminal command.

When OTP has been successfully programmed into your Pi, the output will be 3020000a. Else, the OTP bit has failed, and you will need to repeat the programming procedure. If you run the command several times and OTP is not set, it might be an issue with your Pi’s hardware.

Note: Make sure you do not leave a blank line at the end of the config.txt.

You can also remove the line in your config file using the following terminal command.

The command above will achieve similar results to editing the text file through a text file editor like nano or vim.

You can now successfully boot from a USB storage device.

Boot your Raspberry Pi from a USB storage device

The next step is to install Raspbian OS into your USB device. The procedure is similar to installing Raspbian to an SD Card. We are going to highlight how to write to your USB using Etcher.

2: Download Etcher to write the image to your USB device.

You can download Etcher from the Official Etcher Download page. Etcher is a versatile and lightweight tool to write images into USB devices. 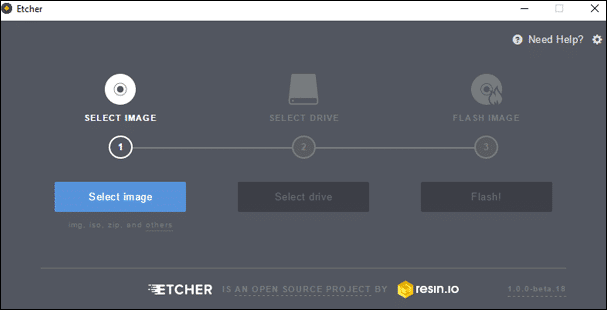 Within the Etcher menu, browse through your system and select the downloaded copy of your Raspbian OS.

The next step is to click on the select drive button to find your USB storage device. Once you locate the USB device you want to use, select it and press the “CONTINUE” button.

Finally, to complete your installation, click the flash button to begin the process of writing your Raspbian image into the USB drive. Give it some time to complete.

When the writing process is complete, take the USB drive and place it into a USB port on your Raspberry Pi.

You can now remove the SD card so that the Raspberry Pi can automatically detect and utilize your USB as the default boot device.
Before you power up your Pi,  be aware of the external drive’s extra USB power requirements.
When you power up, it can take up between five to ten seconds for your Raspberry Pi to detect the USB drive and begin the boot process. In other cases, the boot times might be longer. In such a case, be patient, and the booting process will begin.

Note: Make sure you have ejected the SD card from your Raspberry Pi to avoid Pi from booting from it.

You can also successfully change the boot order in your Raspberry Pi through the raspi-config terminal command.

1: Open the terminal and run the following command.

The command will launch raspi-config, which will allow you to select or change the boot order.

2: Under the raspi-config, select “Advanced Options.”
3: Next, select “Boot Order.”
4: Choose USB to make it your preferred boot option.
5: Finally, reboot your Raspberry Pi OS for the changes to take effect.

How to install and use Log2Ram on a...

How to install Visual Studio Code on Raspberry...

How to connect to your Raspberry Pi using...

How to convert a Raspberry Pi into a...

How to set up Ubuntu Server on Raspberry...